The following was my keynote slidedeck for the LoneStar TIA 2012 Conference held earlier this week:
Freedom to Succeed – Dwell in Possibility from Miguel Guhlin
Relevant Links
Get Blog Updates via Email!

Earlier this week, I had the opportunity to share the following presentation with conference participants at the LoneStar Technology Integration Academy: 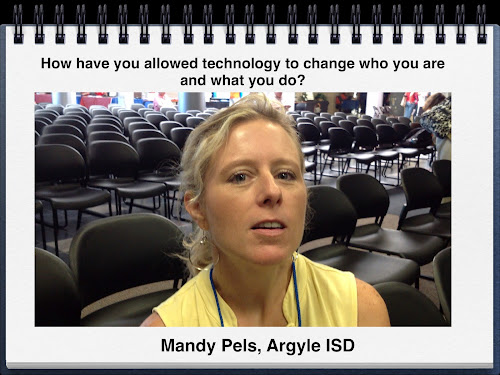 One of the processes which has never been much fun for me with a laptop has been working with video. That’s why when the thought popped into my head of using the iPad for my primary presentation tool–using Keynote, which is top-down, the best presentation software around–I was thrilled but another question immediately surfaced.

The question was simply, “If I implement a Think-Pair-Tweet approach to reflecting on a question, wouldn’t it be neat to interview someone ahead of time, embed the video of that interview, and then play it as a normal response of the presentation?” You know, pre-record some responses from real people in the audience to the question I’m going to ask, then include those in the keynote so that instead of asking the audience to share–which can have one running around the room like Phil Donahue (or David Warlick doing his Phil Donahue imitation, which is hilarious to listen to), you just record several quick video interviews then embed them in subsequent slides to the Think-Pair-Tweet slide.

So, that’s what I did with my iPad. I’d prepared some Think-Pair-Tweets, and then, did some on the spot interviews with folks in the audience with the Camera app on the iPad. Then, I switched over to Keynote, and dropped those video interviews onto the slide following the Think-Pair-Tweet.

It worked beautifully, and more importantly, easily. The only suggestion? Record the video in landscape (sideways) mode rather than portrait…you get a nicer video to work with that’s wide. Well, maybe one other. Try to find a place to pull the person aside where there’s not a lot of background noise. I wonder how difficult it would be to grab a microphone that would work on an iPad to get better quality. Still, imagine doing this in the classroom…absolutely wonderful applications possible!

My special thanks to the LoneStar Technology Integration Academy folks who were open to the experiment, and I want to give a shout out to Merkel ISD’s Cassie Beard, Argyle ISD’s Mandy Pels, and Denton ISD’s Barry Fox (my first victim) and Ernie Stripling.

I definitely encourage you to give this a shot during your next preso from an iPad! The audience really enjoyed seeing folks from their district featured in the presentation, and, IMHO, broke up the monotonous droning on of the presenter (that’s me!).

Here are some examples of what that looks like, albeit without the video play…I hope to post that later: 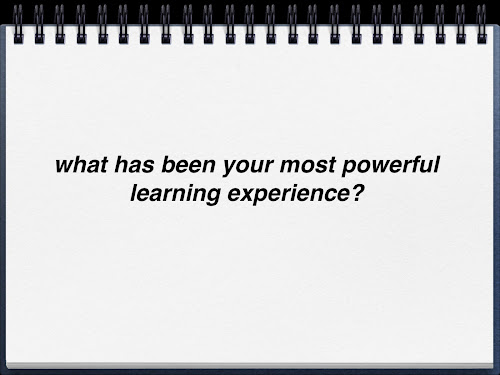 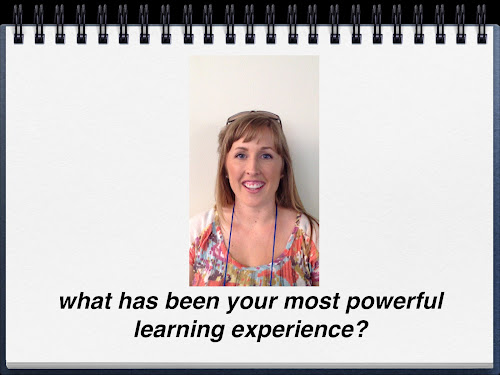 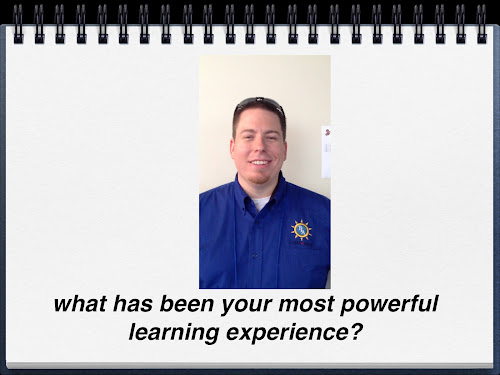 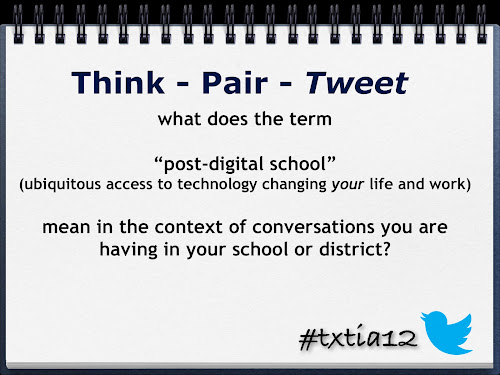 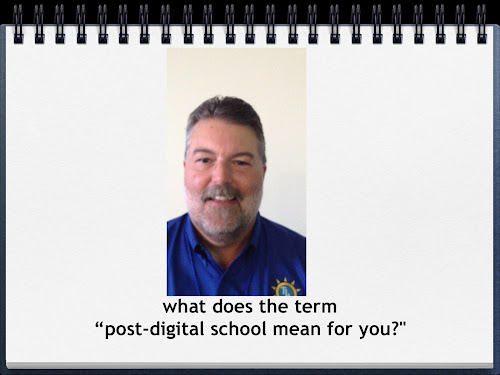 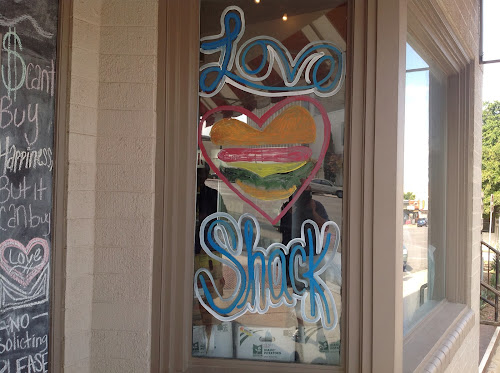 Yesterday (Monday), I drove up to Denton, Texas for the LoneStar Technology Integration Academy (TIA), a phenomenal conference with approximately 1050 people in attendance! After a short nap, I headed out for dinner with Robert Bostic, Assistant Superintendent for Denton ISD, who shared his vision and some great stories (one of which I used in my keynote the next day). Since Robert wanted me to get a “taste of the real Denton,” we ended up at the infamous The Love Shack (artwork pictured above). 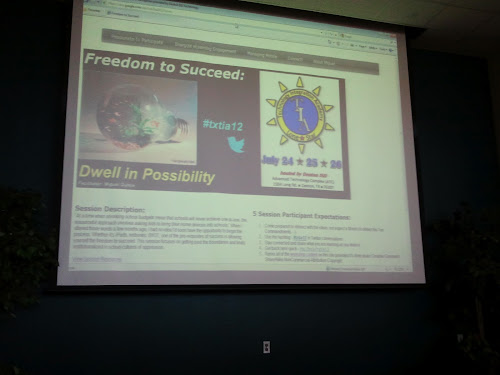 Robert is the creator and founder of the LoneStar Technology Integration Academy (LoneStarTIA), which spans 4 states and throws open the schoolhouse door in an all-inclusive gesture. The cost? $35. 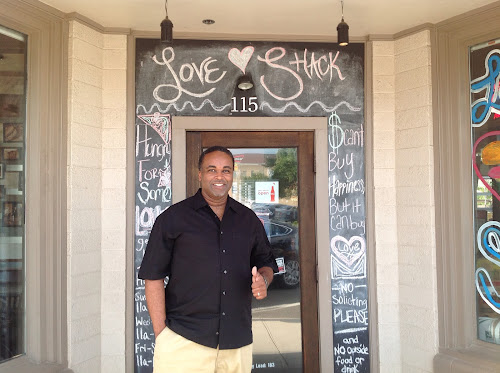 Here’s Robert at this authentic Denton restaurant (who the owner, the waitress assured us, had won an Iron Chef competition!). To be honest, I was a bit leery given the names of the burgers (e.g. The Dirty Love Burger with quail egg on top) being offered, but my burger wasn’t bad! I’d like to offer my thanks to Robert Bostic, Shannon, Carolyn, Barry Fox, and Mr. Hicks, all of whom played a key role in ensuring my success at this stellar event! 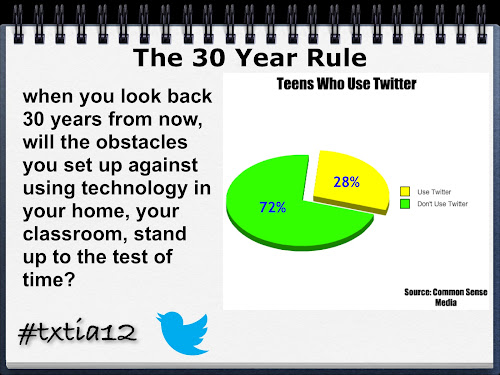 One of Robert’s stories included the 30 year rule, a story his father had passed down to him. As I interpreted the story, the 30 year rule basically asks you to reflect on the impact of an event or decision that you made that had the power to endure for 30 years. If it stands the test of time and you’re able to remember what the decision was about and why it was so important, then the event or decision passes the 30 year rule test. If it does not, then that probably means it wasn’t a decision you should have spent time/effort on.

The way I chose to interpret this for my keynote, Freedom to Succeed: Dwell in Possibility, involved asking oneself the question, Should we really be blocking or not implementing BYOD/iPads because of whatever the reasons and will those reasons matter 30 years from now?

I really like the 30-year rule because it helps put it all in perspective. Imagine if we’d applied that rule to YouTube.com…a few years ago, people were blocking it. The progressive districts were unblocking it, but the laggards decided to unblock it only AFTER others had shown it was successful. It reminds me of Church on Sunday…how we watch what others are doing to know what to do, when if we paid better attention, we would know. Or, should I say, *I* would know? (smile)

Although I enjoyed facilitating the keynote–the audience was HUGE–one of the personal points of excitement for me was doing 3 of my 4 sessions using my iPad. Yes, believe it or not, I presented my morning presos and one after lunch using the following: 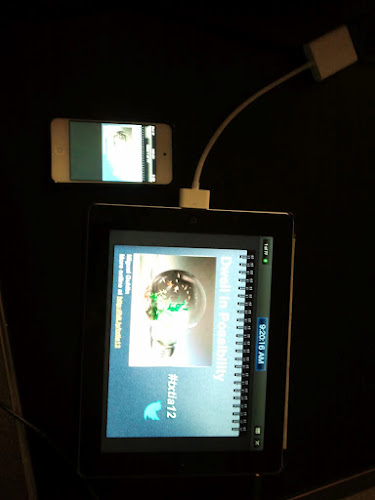 In case you’re wondering, that’s an iPad and an iPodTouch (with Keynote Remote ($.99)) installed on it. Thanks to a tip from Dmantz7 and WFryer, I was in business with this!! My thanks go out to my 12 year old son, who was kind enough to lend me his iPod Touch! I wish there was a bluetooth equivalent that wouldn’t require an iPod Touch, but haven’t seen one yet, even after asking Lisa “TechChef4u” Johnson and Tim “I’m an Apple FanBoy” Holt! (smile)

Ah well, there’s a lot more to share from just one day of TxTIA, but it will have to wait. Sleep beckons….

Earlier today, a colleague asked, How can I embed RSS feeds–including a Twitter feed–on a Google Sites web page?

The question made me ponder various solutions, including taking advantage of Google Reader Bundles, trying out various gadgets, considering how to embed an RSS feed in HTML web page and then wrap an iFrame (whatever that is) and put that code into the Google Sites’ HTML box.
Of course, none of those worked exactly the way I imagined it would. In the end, I searched my email archives, hoping that someone among the Google Certified Teachers (GCT) list had solved the problem. Of course, at least one had this suggestion:

Still, the solution didn’t quite look the way I needed it to. The XML file referenced–essentially, the code for the Google Gadget that I inserted by going to Insert Gadget, then Add by URL–right-aligned the content…I wanted it left aligned.

So, I downloaded the original XML file, modified it to reflect the left alignment as shown below:

The key difference is text-align:left;

Then, I uploaded the modified XML file to a web server, and re-directed the URL in the Gadget to point to my version rather than the one John Calvert refers to in his email. Surprisingly, it worked!

Shout Out: I’m VERY grateful to the original authors of the gadget and thank them for coming up with a working RSS Feed Google Gadget!

Some other miscellaneous, albeit relevant points:

How would you have done this differently or better?
Get Blog Updates via Email!