Over the last few weeks, I’ve been working on various apps for note-taking. I tried to reflect and ask myself, what were the core features I wanted in my daily note-taking app, as well as what are some features others would like?

After awhile, I realized I was getting lost in all the great features. Rather than make a snap judgement, I thought I’d cook up a chart and see what happened if I assigned a score to each based on features available.

Since I often need the “kitchen sink” when it comes to note-taking apps, especially since I like to see my note-taking app as a file cabinet that is an alternative to GoogleDrive, I found myself making certain choices. I also found myself looking for an easy to use app that my family could use.

While I’d encouraged them to use Evernote, then SimpleNote, I found neither a good choice. As much as I wanted to like MammothHQ, it’s absence of a mobile app that allows for editing left me waiting for features.

As a result, I settled on TWO apps for daily use (and I use them a LOT) and the choices surprised me:

Some miscellaneous reflections about the whole pile:

Finally, in spite of all the issues, I do like the “mindset” that MammothHQ founder espouses. It suggests that things may be changing.

COMPARISON CHART
So, here’s the comparison chart that includes feature compilation from various note providers and my own…I realize that I may have something wrong, so don’t be afraid to leave a comment in the blog comments. Again, this isn’t an exhaustive list of all features in each solution but a list of what *I* found valuable and worth having. For the most part, some of you may have similar needs.

Over the last few weeks, I’ve been exploring Evernote alternatives. Of course, my experiences with Evernote are legion and they bedevil me every time I seek salvation from its clutches. The features I’m looking for include the following:

These may be unreasonable expectations, but you can’t blame me. While my Evernote account houses everything but the kitchen sink in it, there have to be some worthwhile alternatives to it. And, let’s be honest, as a writer, I’m also looking for a simple interface to work in that enables me to work anytime, anywhere.
MAMMOTH HQ
A short time ago, I played around with MammothHQ, a rich, full-featured mobile and web app. Unfortunately, I hit the wall with it. Some of the things I didn’t like included

But on the plus size, MammothHQ (pun intended) does allow GUI editing, lists, emailing in content, web clipping, and file attachments. In time, MammothHQ may be the right solution.  But right now, it’s not quite ready. I have hope.

SIMPLENOTE
So, what else is available? SimpleNote.com came to my attention, and it IS simple. In fact, I’d say that I like the interface a LOT more than Mammoth’s pinterest-like board, and it whips Evernote’s interface in ease of use.

Even if SimpleNote lacks a GUI editor, it does provide Markdown support, AND a feature Evernote killed off–RSS feeds!!! You can also publish notes, like this one where I share my suggestions for improvement.

There is also Dropbox support possible…you can backup your notes (or download them as a zipped file) as well as use popular text editors to create and save to Dropbox that end up in SimpleNote, synced on all your devices!

SimpleNote also comes with a Mac app…how neat is that, it doesn’t just live on the web and on your phone, it’s a Mac app.
😉

The SimpleNote app also has Premium features…that are provided at no-charge, apparently! For how long it will remain, who knows. After a brief twitter exchange with @simplenoteapp, followed by a few emails, they were kind enough to grant me a 12 month Premium account…you can see the features shown right.

It’s also easy to make “lists” in SimpleNote, a feature demonstrated by this:

If you’re looking for a simple interface, then SimpleNote may be the app for you…here’s what one of my notes looks like on my iPhone: 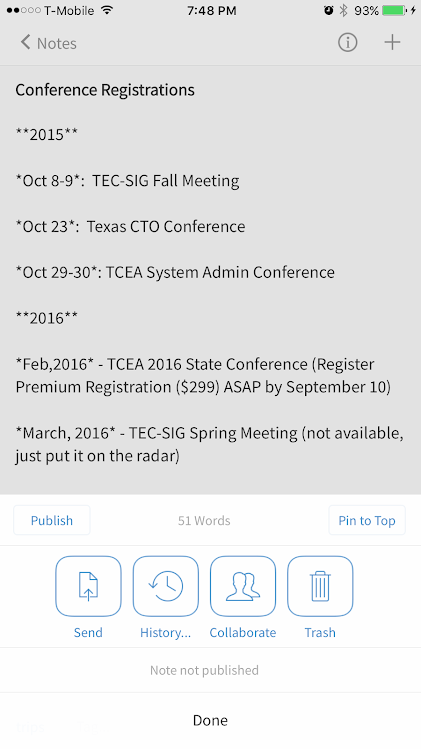 For those of you who also worry about data privacy and security (ha, like we have any), I urge you to use ParanoiaWorks Text Encryption, which is available for every platform except Chromebooks…that includes iOS, Android, Mac, Windows, and GNU/Linux. Find out more here about these free encryption tools! PTE will allow you to encrypt/decrypt your notes while on the go (copy-n-paste required) because your notes are NOT encrypted while at rest. They are encrypted in transit (https) but…well…not encrypting data while at rest is problematic. Still, don’t put anything on the web, or in the cloud, that is private and lacks encryption.

Ok, before I get TOO excited, I’m going to keep kicking the tires.