Playing around with XtraNormal.com, I took a piece of dialogue from The Heresies of an Ostrich Leader and put it in…here are the results: 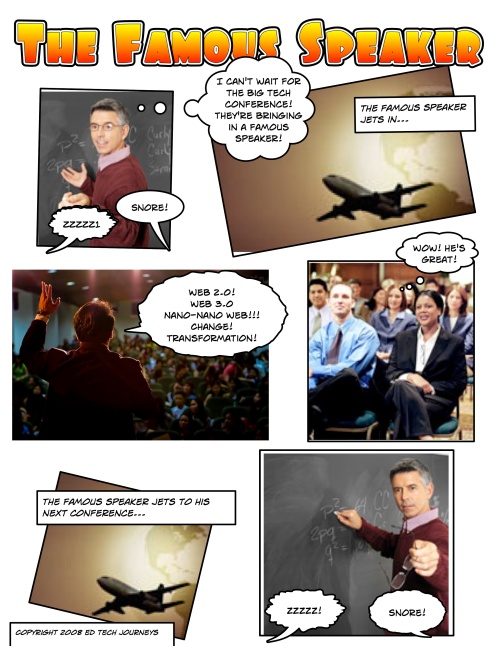 Pete Reilly (EdTech Journeys) created the image above and I thought it might be time to dip into the Heresies of an Ostrich Leader and see what he might say. So, for fun, here’s another installment of….

I walked slowly into the meeting room. His eyes, orbs of dark liquidity, sought mine across the room. As the others packed their briefcases, some stuffing laptops and cords in a jumble, he folded shut the notebook in front of him. When the room had cleared, only he and I and my disappointment remained.

“I read your email, Peter,” he began. The moment’s hesitation did not betray his weakness, but rather, mine. It clawed at me like a ravenous beast, even as I fought to beat it down, like a child slapping at malevolent waves.
“You’d hope the speaker’s words would change things, didn’t you? That somehow, that all would see the way in the light, that their enthusiasm during the presentation would survive the journey back here.”

His voice stirred me. I blinked once. Again. “I just don’t understand what it all means. I had such high hopes. I know we’re all jaded, that change can happen, that a powerful speaker could inspire us to be more…but it doesn’t seem to be playing out that way.”

As he tucked the silver pen he’d taken notes with into his jacket pocket, a smile slowly appeared. “As human beings, we change so little at a time, it isn’t wrong to compare us to young plants that must be tended by the sun, the steady drip of rain, nourished by the nutrients in the soil we are planted in, even as we bloom to reach the sky.”

I meditated on his response.

“You should look, not to how the speaker’s words changed those around you, but rather, how you were inspired to pursue change.”

The door popped open, and a secretary walked in. Her trim solid blue suit framing a crisp blouse reminded me of Catholic school. A sentry against disorder, a clergywoman of the status quo, she cleared away the donuts and coffee stained napkins.

He whispered, “You see, as much as you crave inspiration and change, the organization demands order and stability. Tethered to the hand of a child, a kite’s flight is a sight to behold. Loosed, the kite falls from the sky.”

Which would you rather be?

Be sure to visit the ShareMore! Wiki.