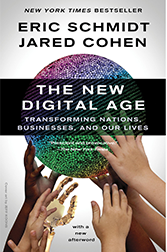 Earlier this week, a copy of Dr. Eric Shmidt’s and Jared Cohen’s book, The New Digital Age: Transforming nations, businesses and our lives arrived on my desk. It’s been awhile since I have reviewed a book–I’ve been busy catching up on my fiction reading–so I had to remind myself that it’s really about getting acquainted with the ideas.

In this blog entry, I explore the Introduction, then share my reflections. I will repeat the process over the next few days. I encourage you to explore the ideas in The New Digital Age: Transforming nations, businesses and our lives. Read my notes on this book.

Over the next few days, I’ll be reading the book and sharing my notes on what jumps out at me and my quick reflections.

As I look forward to Chapter 1, I’m curious to see how the authors will address the challenges. Get your copy online at The New Digital Age: Transforming nations, businesses and our lives.

Make Donations via PayPal below: