“In response to declining utility of CALEA mandated wiretapping backdoors due to more widespread use of cryptography, the FBI is considering a revamped version that would mandate wiretapping facilities in end users’ computers and software. Critics have argued that this would be bad for security (PDF), as such systems must be more complex and thus harder to secure. CALEA has also enabledcriminals to wiretap conversations by hacking the infrastructure used by the authorities. I wonder how this could ever be implemented in FOSS.”

I encrypt everything, whether it’s earth-shatteringly confidential (ok, NOTHING I have is that) or mundane stuff (99% of my stuff) like important receipts, contracts, tax returns, medical records, and financial transaction records. I’m actually thrilled to read the following news that the FBI is having trouble eavesdropping on private citizens because there is more widespread encryption.

Can police search a cell phone as part of lawful arrest and search it? NOPE! Read this:

This case requires us to decide whether the police, after seizing a cell phone from an individual’s person as part of his lawful arrest, can search the phone’s data without a warrant. We conclude that such a search exceeds the boundaries of the Fourth Amendment search-incident-to-arrest exception.

If you’re using Google Drive, Dropbox.com,  Box.net, or the many other cloud storage solutions, you should encrypt your data before it’s put in the cloud. You can use many solutions, whether it’s individual file encryption tools like AESCrypt.com, 7zip compression utilities, or Truecrypt.org and/or Boxcryptor.com, 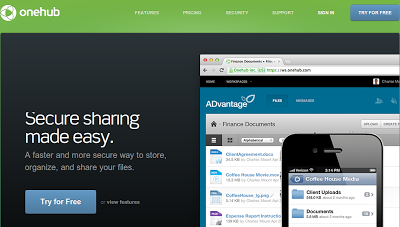 For organizations that have confidential data, I was thrilled to find out about a solution known as OneHub.com. It’s a solution that reminded me of a solution like Dropbox, but with AES encryption security built-in. Here’s a quick tour:

Some of it’s main features appear below:

What’s more, you can install it on your own servers or go vendor-hosted. I found out about it from a law firm who wanted to exchange confidential documents with a public school district. Pricing is also pretty reasonable.