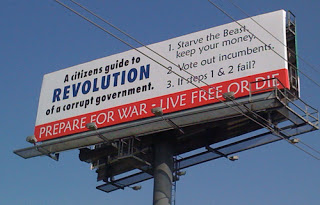 On my way somewhere last week, I saw a sign that shocked me. You can see it above (a friend found a picture online and shared the link with me as I tried to describe it). Wow, what an incredibly frightening sign. A quick google search on the terms, and you’ll find that it’s been around for awhile.

Let’s take it a bit at a time:
1) Starve the Beast. The beast represents not only the Beast of Revelations (Bible), but also “Big Government.” This is the Government that draws the ire of those who see precious taxpayer funding being diverted from their pockets to programs designed to benefit the mass of undeserving Americans (e.g. failed public school systems crowded with the children of illegal immigrants, etc.). Here’s what Wikipedia shares about it:

“Starving the beast” is a fiscal-political strategy of American conservatives[1][2][3] to cut taxes in order to deprive the government of revenue in a deliberate effort to create a fiscal budget crisis that is intended to force the federal government to reduce spending (rather than restore tax levels). The short and medium term effect of the strategy has increased United States public debt rather than reduced spending.

I’m sure some would argue with Wikipedia editors final statement in the paragraph above. George Lakoff, who wrote a book Don’t Think of an Elephant (read this summary) that I read some time ago, is quoted as saying the following about this strategy in Muddy Politics: The Apocalyptic Pain of Starving the Beast:

The Republican Party holds to the theory “that social programs are immoral because they make people dependent,” Lakoff writes. After hearing Republicans argue throughout the year against providing unemployment benefits to the millions of American who still cannot find work, it has become acceptable to describe these people not only as dependent but also lazy, serially breeding animals, drug addicts, hobos and, in general, taxpayer leaches who ride on the backs of the ever-dwindling population of hard-working and patriotic Americans.

Lakoff continues: “(I)f you believe that social programs are immoral, how do you stop these immoral people? It is quite simple. What you have to do is reward the good people – the ones whose prosperity reveals their discipline and hence their capacity for morality – with a tax cut, and make it big enough so that there is not enough money left over for social programs. By this logic, the deficit is a good thing. As Grover Norquist says, it ‘starves the beast.’ ”

The second admonition is “Vote out incumbents.” Note that the linked web site points out that the goal is to vote out incumbents–obviously corrupt folks, per their web site–and replace them with “progressives” (which is one word for Democrats) and independents. Unfortunately, they then go on to bash Democrats, a clear attempt to link “Progressives” with something other than Democrats. It’s quite funny to see the word games and the strategy.

The third step on the billboard is to evaluate the success of steps 1 and 2, and if those fail, to Prepare for War.
I don’t know about you, but that kind of rhetoric is frightening. When you start to consider it in terms of our public school education, that really means the dismantling of public school education.

Hundreds of school districts in Texas…have filed suit against the state over public school finance as many districts continue to experience deep cuts in state funding…The lawsuits are in response to the state’s decision to cut billions of dollars from Texas public schools.   (Source: Brownwood ISD News)