Source: Youtube – http://www.youtube.com/watch?feature=player_embedded&v=jaIhEXZ7WW4
About the program in the video above (Codea), a commenter on YouTube wrote the following:

Just bought. YOU CAN NOT EXPORT OR SHARE A SINGLE LINE OF CODE.
It’s useless now. Do you agree?﻿

Compare that with MIT’s Scratch…. 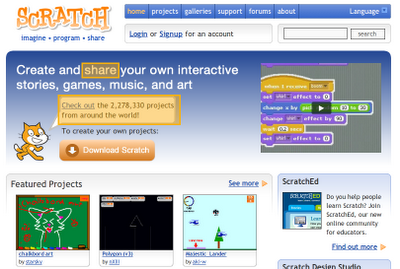 In the iPad’s Defense, I spent some time quoting sources that MIT’s NO-COST programming project for kids–SCRATCH–had been kicked off the iPad.

Apple rejected the app, citing a rule that apps may not contain code interpreters other than Apple’s. This rule appears to be specifically designed to prevent meta platforms such as Adobe Flash from appearing on the iPad, thereby allowing Apple to keep its iOS platform to itself.

The young community of Scratch programmers, however, doesn’t pose a threat to Apple’s business, and the rejection of the Scratch app shows how Apple’s developer rules can harm the art of programming.

To that post, Tim Holt shares the following posts that put a hole in the armor of my original assertion that iPads are prohibited from being used for programming:

His foundation’s philosophy is to teach young people the power of creative exploration using 21st century tools. The class he teaches uses the iPad (a 21st century digital tool that’s far cheaper than anything most schools can afford of similar capability, he says) and an app called Codea. The app enables the creation of games and projects right on the device using the Lua programming language. (See video below for example.) Alvelda (who has no affiliation with Codea) calls it “a completely powerful and self-contained programming environment” that he says is great for teaching simple programming, something he considers essential for them when they eventually become working adults.

Even so, the iPad–limited by Apple’s philosophy and decisions about its use–is able to make a programming app available for $7.99 AND not allow you to share it.

Apple now does allow for interpreted code to be run in-app, but still prohibits the download of such code. As noted byTouchArcade, this means that anything you create in Codify can’t be exported (or imported). (Source – MacRumors on Codify/Codea)

Sharing. It’s fundamental to the Read/Write Web. Remember, Sharing is THE threat.

“Sharing is the threat. Not just a threat. It is the whole of the thing...This act of sharing voids “any pretensions to control, or limitation, or the exercise of power“. (Mark Pesce as cited here)

Embrace the void and what that means.
Of course, I don’t expect schools to do that. iPads and what they offer is a cohesive package, an apple too delicious to not bite into.
Of course, there are other perspectives. I love this line in this article about Danah Boyd’s laptop:

In a juxtaposition that causes her no end of mischievous delight, her laptop bears a sticker of Snow White, whose outstretched arm gently cradled the Apple logo. (Source: Pamela Paul, Danah Boyd-Cracking Teenagers’ Online Codes)

Updated: One of my main complaints about the iPad was that it didn’t offer support for Scratch programming from MIT…however, there are other solutions out there, such as the ones outlined in this blog entry–6 Awesome Code Editors for iPad.

1 thought on “Programming on #iPad = No Sharing (Updated)”